Since 2016 Istituto cultura italiana joined the European voluntary service programme (EVS, following ESC) hosting European young people in Georgia in order to foster intercultural-exchange, contributing to the renovation of democratic, educational, social and civil structures in Georgia, and to involve young people in activities useful both for the local community, and for their personal and professional growth. 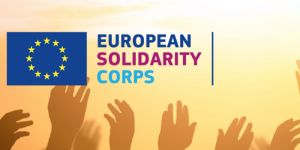 During several projects, we have been leading an editorial board with volunteers for digital publishing, we have been organizing a language club and intercultural exchange involving the local community, organized workshops and lectures at other organizations and institutions, and carried out a daily work on media-literacy and the conscious use of new technologies.

The most recent activities have focused in the learning and the preparation of a Mediawiki installation, completed with all Wikisource tools, and prospective activities are expected to include open-air initiatives in the social-care and societal/environmental fields.

Our projects are distinguished by the right balance (in our opinion) between social/ public relations and study/work activities, the first being a natural product of a preparatory work which should be equally stimulant and significant "per se". 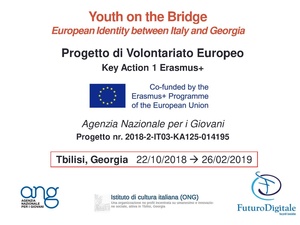 Infopack Project Youth on the Bridge, European Identity between Italy and Georgia (part I) 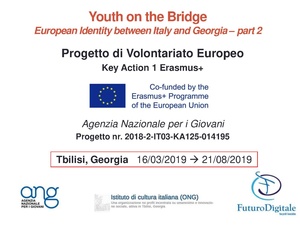 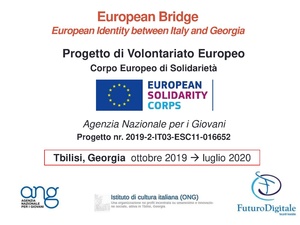 Istituto cultura italiana from the beginning of its activities and administration has focused on the combination of a cultural offer, ranging from café philo encounters, lectures, painting exhibitions, language lessons – all of them characterized by an international disposition and vocation – with an information processing work, aimed at valorising created data and to let daily life of the organization and its members empowered, rather than "constrained", by data structures originating from their locality and specificity, rather than from the "elsewhere" of multi-national industries and global market.

According to this view, we have cooperated with local partners and friends, for the creation of a IT (information technology) back-end for the management of student's classes and lessons, organization of contacts, timetables, internationalization (i18n) and presentation of curricula, "real time" booking of lessons, an "enhanced" chat encouraging at complexity of communication rather than the radical opposite, installed on our own website, and much, much more, devoting to that approach significant resources of the organization, personal energies, and time.

Typically our projects are composed by media-literacy activities, focusing on themes proposed by the partner organizations and fitted on the interests of volunteers, and by intercultural activities, with attention for writing of articles, reports, interviews, workshops held at other institutions, language exchange clubs, and if possible, cineforum or theatre's events. Here is a brief summary of the activities organized until now!

Our organization members do their best to provide volunteers with an accommodation suitable for their needs, and with regards of the three projects listed below we have hosted volunteers initially in a prestigious flat in the city center (right besides corso Rustaveli), shared with a professional and past student of our organization, then in a private flat in Saburtalo, near Kazbegi av., and finally in a modern and comfortable private flat located in Vazha Pshavela av. (3 metro stops from our office).

In our experience, considered that cultural and societal differences between Georgia and European countries are significant, a private room in family is the best possible solution, in order to guarantee that volunteers are assisted through out all their stay, and they will not suffer isolation.

A cohabitation with a local person is also the best way to ensure that volunteers will undertake their experience with the right spirit, that is non only for the benefit of the local community but also for being able to "host", in turn, different behavioral models and sensitivity that another culture is able (or should be able) to offer, inasmuch as both aspects are the very purposes of the programme: a genuine impact on the hosting community, and an equally genuine learning dimension.

Georgi Datukashvili (Project coordinator) Georgi has graduated in Russian language and literature at Sulkhan Saba Orbeliani State Pedagogical University in 1997 and he holds a Master of Public Administration obtained in 2007 from Zurab Zvania’s Georgian Institute of Public Administration. He has been working in Non-Governmental Organizations since 2009, with roles ranging from logistics management at Première Urgence Internationale, translator of legal documents and language teacher of English at Association SHEN, project management at Danish Refugee Council, and Database manager/bookkeeper at Caritas from 2013 to 2018. Georgi has a perfect command in both English and Russian language, and strong administrative and "public relations" skills. Georgi is entitled to coordinate the various aspects of the ESC project, and to personal or intercultural learning support.

Mariam Kokolashvili (Logistic support) Mariam holds a bachelor in Cultural Tourism at Shota Rustaveli Theatre and Film Georgia State University, and is specializing in "event management" at Budapest Business school. She has participated to the AIESEC project (International Association of Students in Economic and Commercial Sciences) with presentations on environmental issues, global warming, and tourism activities, and is member of the Youth Enrichment Society (YES) in Budapest, to helping the Hungarian government and Hungarian universities with internationalization strategies. Mariam has an international background and she is an enthusiast team's leading and facilitator.

Tommaso de Vivo. (Administrative tasks and task-related support on media-literacy) Tommaso holds a master degree in Philosophy from University of Florence and a "Ph.D." in Civilization of Humanism and Renaissance, with joint-diploma from University of Florence and Paris IV-Sorbonne, in historical-philosophical area. He has been redactor, teacher and professor of computer science in state and private organizations and at University of Florence (degree course "Storia e tutela dei beni archeologici, archivistici e librari") before undertaking his curriculum in humanities, and he is an expert in bibliographical research, digital publishing and semantic data. Tommaso will provide task-related support to volunteers specifically in the field of media-literacy and in the preparation of their workshops.

Lela Pirtskhalava (Linguistic support) Lela holds a degree from Tbilisi State University in English language and literature. From 1993 to 2008 she has been lecturer in English language at Technical University of Georgia with concurrent assignments at International Institute of Ecology and Agriculture, Première Urgence Internationale, The Charitable Foundation of the Georgian Patriarchate, and International Institute of Economy in the same period. Since 2011 she has been English teacher at Professional college Eqvtime Ghvtiskatsi, Creative Educational School, Buckswood International School, Italian School "Tsiskari", and School of St. Nicholas presently. In the academic years 2015–2017 she has been co-organizer of the English language classes in Philosophy for high-school children "slow reading of Plato’s Republic" at "Junior Achievement in Georgia" organization. Lela has an innate vocation for English culture and language, which she has assumed as lifestyle, and together with her perfect command and expertise in both Russian and Georgian language she is an ideal person for leading any kind of student to the fulfilling of their learning objectives.

Gloria Maritan Gloria Maritan holds a degree in “Sciences and techniques of graphic and multimedia Communication” (Istituto universitario salesiano, Venezia, 2019). She has experience as graphic designer (at “associazione teatro boxer” and "studio 7am" both in province of Padua) and she has participated as a volunteer in humanitarian missions in the former Yugoslavia areas from 2014 to 2017 (Comitato Provinciale di Sostegno alle Forze ed Iniziative di Pace of province of Padua). Gloria has an artistic background, speaks English, and she has walked the Camino de Santiago in 2019.

Luca Speziale Luca Speziale holds a degree in Political sciences (University “La Sapienza”, Rome, 2018) and a master in European planning techniques (Rome, 2019). He has experience as fundraiser (Xena marketing, Rome 2018), project manager (Progeu, Rome 2018-2019) and as supporter for the implementation of a Local Action Group (Fondazione Logos Pa, Rome 2019). He has participated to short term Erasmus projects in Turkey and Macedonia, he speaks English, and as passionate reader he has created in 2017 the literary blog “smugglingarts” which can be found here.

Eleonora Febbe Eleonora Febbe has a degree in Applied Interlinguistic Communication from University of Trieste, a Master in Russian Studies from University College London and a Master degree in Interdisciplinary Research and Studies on Eastern Europe (MIREES, joint diploma from the University of Bologna and Saint-Petersburg State University). She has completed internships at the Italian Embassy to Kazakhstan and at “Istituto Affari Internazionali”, a think-tank based in Rome. Eleonora taught Italian in a secondary school in London as part of a volunteering project and has taken part in summer schools in Georgia, Romania and Bulgaria organized by the “Centre International de Formation Européenne”. She speaks English, French and Russian, in addition to her native Italian. She is a contributor for the online magazines “Affarinternazionali.it” and “Eastjournal.net”.

Claudia Palazzo Claudia Palazzo holds a bachelor degree in Sociology from University of Trento and a diploma in International Politics at ISPI (Istituto per gli Studi di Politica Internazionale, Milan). She has been intern at CSSEO (Centro Studi sulla Storia dell'Europa Orientale, Trento) and has delivered speeches on Eastern Europe at many conferences, including at Columbia University, Università Ca' Foscari, Al Farabi University, AUCA (American University of Central Asia, AUCA), and more. Claudia has participated in European training courses and youth exchanges in Romania, Lithuania, Turkey and Azerbaijan. She speaks English, German, French and Russian, besides being Italian mother tongue. Among other publications, she is the author of the book “Morte del piccolo principe e altre vendette” published by “Il Palindromo” (2016).

Gabriele Rota Gabriele Rota has a degree in mediolatin philology from University of Milan and a master degree in Italian and linguistic sciences at Università di Bologna (with a thesis on automatic language processing for the recognition of false news on social media). He has been educational tutor for the Royal Arcore Associazione Culturale Linguistica (Arcore), editorial assistant for the non profit association "Succede solo a Bologna", web editor, as well as member of various musical groups as a drummer. Gabriele is now participating as volunteer to the Erasmus+ project "Youth on the bridge, European identity between Italy and Georgia".

Mattia Baldoni Mattia Baldoni has a degree in Political Science and International Relations from Università degli Studi di Perugia and a master degree in Local and global development from Università di Bologna. His field of study is focused on the area of Russia/CIS (Commonwealth of Independent States) and Caucasus and is collaborating as redactor with the newspapers “Il caffè geopolitico” and “Russia2018”. He had been doing an internship at Fondazione di ricerca Istituto Carlo Cattaneo (Bologna) and at Università degli Studi di Perugia (Progetto FISE - Finestra sull'Europa) and is now participating as volunteer to the Erasmus+ project "Youth on the bridge, European identity between Italy and Georgia".