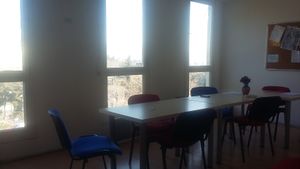 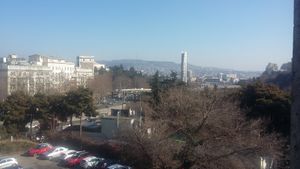 Members of Istituto cultura italiana (NGO), (Mattia Baldoni, Gabriele Rota and Tommaso de Vivo) hosted at their office Lasha Kharazi, PhD candidate in Philosophy at Tbilisi State University and recently invited Professor of philosophy at Caucasian University. During the presentations, Lasha said to having started his studies 4 years ago and since 2 he is writing his Phd thesis, at the same time delivering lectures in several academic classes.

Tommaso stressed that you need such amount of time (at least 1 year for the preparatory work, and then at least 2 years for writing the thesis) in order to examine and to collect bibliography.

Lasha answered that the problem now was indeed to reduce the bibliography which he had collected along the time, and that in some way he wanted to reduce his entire bibliography to the works of the only [Gilles] Deleuze.

Lasha then told that his challenge now is to focus on the thesis so accomplishing this final academic step.

Then, as usual, Mattia and Gabriele presented themselves to Lasha, talking about their previous experiences and studies.

When Gabriele presented himself as a linguist, Lasha told to having read some Italian poetry during his course of study, and specifically some parts of Dante's Commedy. He told that he tried to read some excerpts in the original Italian dialect (being enthused by such reading) and mostly from a Russian translation in verses or a Georgian translation in prose.

Tommaso said that indeed it does exist a Russian translation of Dante's Commedy, in verses, famous for being of literary and artistic value.

Then Lasha asked more about the language of la Commedia compared to the modern Italian language.

Mattia, Gabriele and Tommaso answered that the ancient language is difficult even for them, not only for the vocabulary (including the fact that same words can have a different meaning) but also for the structure of the phrases and the complexity of the “logics” (a word mentioned by Tommaso).

Lasha also told that some poets may stress less the linguistic part and that therefore they could be more easily translated.

Then, Lasha talked with Mattia and Gabriele about Tbilisi, and asked their opinions about it.

Both of them stated that the city is very beautiful, dynamic and rapidly developing. They also said that in Tbilisi you feel yourself safer than in many European or Italian cities.

Lasha agreed with all these impressions. Then he observed that, obviously, Tbilisi has also some problems. Notably, the total lack of urban planning. Buildings and skyscrapers are built without any order and harmony.

Lasha added that the rhythm of building and demolitions had increased a lot especially in the last 15 years. The Georgia's capital wanted to renew itself, but the process lacked of a regulation.

Lasha got up from his chair and looking the city's view from the windows of the office, almost inviting all present to contemplate the sense of this transformation. The current skyline of Tbilisi is characterised by scattered skyscrapers and futuristic monument, like the Monument of Heroes, in Heroes Square. To provide a feedback to the discourse of Lasha, Tommaso mentioned the word “gentrification”, and Lasha answered that, yes, that is part of t process.

Tommaso also said that indeed Tbilisi lacks of a urban design compared, for instance, to a city like Yerevan (in which a precise design does exist, notwithstanding at a cost).

Lasha told that nevertheless Tbilisi has a great variety, and Tommaso confirmed the statement saying that indeed it do exist “multiple centers” in Tbilisi.

Then, because the attention of all for a moment was directed towards the light projected in the sky from the monument in Heroes square, Tommaso asked whether the Monument of Heroes is meant to be just for war's veterans, or also for the so called “Georgian Heroes”, among which was awarded Merab Kostava himself, as well as, Tommaso added, an American politician awarded by Mikheil Saakashvili.

Lasha mentioned the name of “McCain” from the Tommaso's reference, and then he said to not being by principle opposed that foreigners can be “National Heroes of Georgia”. [Regarding that, Tommaso would say that an hero is somebody who acts with determination in a condition of substantial solitude and out of the political scene, so that he is critical that a politician, thus enlighten and “courageous”, can be awarded of such a honour] Lasha moreover added that McCain does not exemplify his ideal type of politician, because of being over militaristic.

After the observations made by Lasha, Mattia confirmed his opinion about the two-speed development that he perceived in Tbilisi and travelling in the Georgian countryside. We can see a modern capital, with all services and very safe, and we can compare it to territories outside: visiting not so far Mtshkheta, Gori or Kojori, Mattia and Gabriele have seen opposite contexts, quite underdeveloped and poor places compared to Tbilisi.

Mattia, remembering his studies, spoke about this trend (ed. “the two-speed development”) that is also common to several European countries, above all in the East. Social indicators collected by EU show that generally regions around capitals are more developed than more peripheral regions.

Indeed, on the one hand, city's capitals are the core of national development, best places in terms of competitiveness and entrepreneurship. On the other hand, countryside and peripheral regions are somewhat excluded by this great process of integration and development.

Tommaso here would add that this is indeed the reason why Georgia's population is concentrated in Tbilisi. A partisan administration distributes wealth favouring things and people who are close rather than those who are far away from it, and supposedly this process exacerbated in Georgia after the collapse of the Soviet Union, during which on the contrary factories and state undertakings were well disseminated on the territory.

After these considerations (that in some way were relative to the location of the current office of the Institute) Lasha told to Tommaso, Mattia and Gabriele to having had a previous experience related to Georgian television (first channel) : because the office is indeed currently hosted in a building of such television.

Lasha told to have visited in the past an office of the channel (perhaps in the same building which they were inhabiting in that moment) proposing to insert his registered intervention among the tv programming. Such intervention was supposedly (because Mattia, Gabriele and Tommaso did not ask much on the subject) about intellectual and possibly philosophical topics, considered the specialization of Lasha.

Lash told that he made such registration and then he brought it at the tv office. The personnel apparently said that it was good (something regarding which all of them were sure) and notwithstanding they said that it did not fit well with their traditional programming.

Then Lasha did an interesting observation: he said to think that the role of a state television should be precisely to give space to citizens.

Then, the discussion shifted to other topics. Lasha started talking about his passion for football. Also Mattia and Gabriele share this passion, but both stated that, after the start of academic studies, they gradually reduced their attention to this sport. Lasha told that sometime he plays at the “University Sport Complex” and invited Mattia and Gabriele to play together some match. They also played football (Mattia for 11 years as goalkeeper, Gabriele as forward), but now they feel themselves very “rusty”. They agreed with Lasha that football is largely the most appreciated sport by Italians.

Talking about Italy, Lasha expressed his desire to visit it, starting from Venice. Mattia and Gabriele stated that Venice is a wonderful city being a tourist, but it’s no too comfortable living there. The city is ever full of tourists, lifestyle is very expensive and living “on the water”, between humidity and transport limitations, is quite complex.

Anyway, the city is a pattern of beauty. For example, Gabriele suggested that the Belgian town of Bruges is called “the Northern Venice”, and also Saint Petersburg is often compared to this Italian city. [Venice – Tommaso would add here – is also the name of a resort town with canals in the suburb of Los Angeles, in California.] Then, Gabriele and Mattia talked about Italy and its beauties, but Lasha was more interested in our different dialects and language “islands”.

So Mattia and Gabriele tried to explain that interesting and complex argument. They showed in a map of Italy where are located such “islands”. They showed him the Catalan community in Sardinia, Arbereshe and Greek-Croatian communities in Southern Italy, Slovenian and German in the North and many others.

Lasha was really impressed by this linguistic heterogeneity. Then he asked about the politic situation in Italy. He told to having heard about an emerging party in Italy which is implementing a kind of “cyber” or “web-democracy”.

Mattia and Gabriele explained quickly the composition of the government in Italy, and expressed their doubts about one or both the leading parties in Italy (Movimento cinque stelle, and Lega Nord) questioning whether or not “honesty” (one of the claims of the first) is or not “enough for ruling”.

Towards the end of the meeting, Lasha asked Tommaso what happened to the platform he had in mind to develop or to use following the “Cafè philo” meetings, which they had attended together.

Tommaso answered that finally he found an obstacle on people, who just enclose their habits in the use of standard communication means (like “social networks”) and they are satisfied with that.

He also added that the fact itself of calling “events” (at least with reference of Italian culture and language) social encounters and meetings is derived from such “digital” context.

He continued saying that people are in some way enclosed in the design of such “platforms” and frameworks, even in the real life, and just they fill them with contents of themselves and their lives. But, by doing so, they are not free, because freedom means, eventually, to intervene in the design of the things in which we are immersed.

Lasha told to find a “almost one to one” correspondence to what Tommaso was saying with an essay of Heidegger. [title to be retrieved]

Then Tommaso added (perhaps more than necessary) that this is true also at basic level, and mentioned the symbols [the so called “emoticons”] which users find in the chat, intended to facilitate communication, and which actually weaken the expressive ability of people, which is a fact of great gravity in his opinion.

After having said all this, Lasha slowly exited the office and Tommaso went away with him.