From Redazione
< How it works
Jump to navigation Jump to search

"Multiple choice questions" are a way to implement a "reading comprehension test" to determine that the text served has been actually read, and in this sense the solution exceeds the requirements inasmuch as a read text (of a certain value) typically is not fully understood, but just, "understood to some degree", with reference to the intellectual contents of the reader in that specific time. On the other side, we simply couldn't rely on the amount of scroll as a meaningful indicator that the text was read "to some degree", and for this reason, in the absence of a scan of mind miniaturized in the user's device (which hypothetically might measure precisely the portions of text actually read, and the kind of comprehension for each of them) we opted for "Multiple choice questions" as an appreciable compromise, given that you might equally go through the text of which to provide proof of understanding, quite chaotically and instructing yourself to just recognizing the elements useful for passing the test: so that, in this case, the solution would not exceed the requirements and would appear to be perfectly adequate.

Currently (November 2020) a "Multiple choice questions" test is implemented as a parser function in the following form:

which, on the front-end, will produce this result. 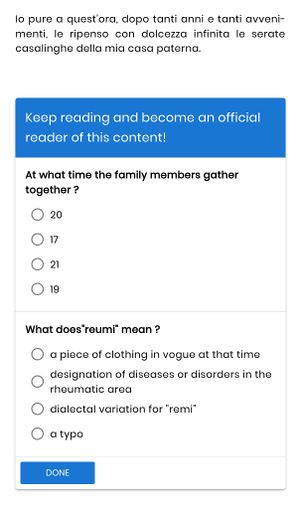 where the reader can interactively answer the questions and then incrementally revealing subsequent parts of text.

Of the wiki-text above is just to be noted the following:

It is worth to add that the "concealed" portions of text are not to be considered confidential information and the system, specifically on the back-end, given the nature of a wiki open to the public, might be hacked. Also, the same contents can be found on the Internet on open access, so here the purpose is just to offer a text with some added value (a "streamlined" navigation, additional notes to the text, in fact, "multiple choice questions", and more) rather than actually preventing access to it: of course, the purpose is specularly opposite to that, and an enterprising user who manages to access the contents in some ingenious way, has not yet demonstrated to having read, and understood "to some extent", "Serate d'inverno" of Maria Antonietta Torriani, in this case.