Borders and frontiers, the past, the present and the future: comparative history and international relations between Italy and Georgia link

The following lectures have been delivered by Mattia Baldoni within the Erasmus+ Project “Youth on the bridge, European identity between Italy and Georgia”, implemented by Istituto cultura italiana (NGO). 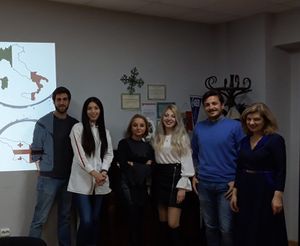 The presentation focused on the importance of borders and frontiers’ subject in our pasts, underlining the development of our different nation-building processes between XIX/XX centuries and through the World War I. The first meeting was held at “Italiuri Kulturis Centri” (Centro culturale italiano) of Ilia University, while the second at Sokhumi State University, in exile here in Tbilisi as Abkhazian University.

The first event was organized thanks to the availability and attention of especially prof. Manana Siprashvili and prof. Nana Lomia, besides all other staff members. 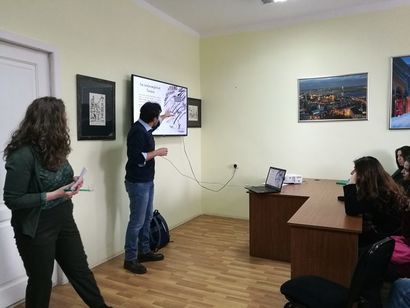 The second conference, at Sokhumi State University, was held in front of 30 people, among students and professors.

The topic was the same, just with little variations required by the professor Maia Jijava. She suggested to Mattia to insert some references and slides about an argument very interesting for students of this university in exile, that is the birth of regional autonomies and minority problems in Italy and the case-study of Trentino Alto-Adige.

Mattia agreed, highlighting historical aspects and how this subject became important during the World War I. He showed how the so called “unredeemed lands” (“terre irredente”) were more than those really inhabited by Italians. Comparing Austrian Empire’s ethnic composition and “Unredeemed lands”, Mattia showed the asymmetry between what Italy claimed and the status-quo. Trentino Alto-Adige is a perfect example of that. In fact, till today, people living in the northern part of this region (Sud-Tirol) is 90-95% German mother-tongue.